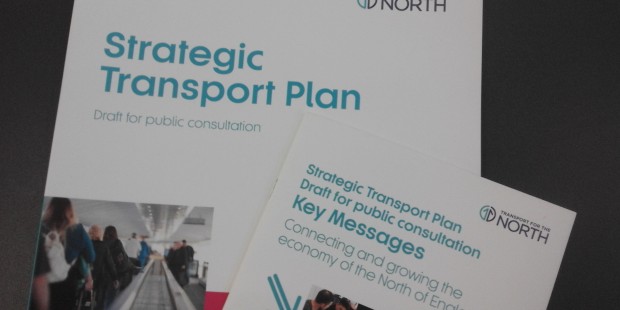 Anthony Rae writes 4th March 2018 What is the carbon test? It’s in two parts: has the strategy set a carbon reduction objective as one of its core policy ‘drivers’ by which every aspect will be shaped and tested?; and has it actually quantified with modelling by much transport carbon emissions will be reduced as a result of the strategy being implemented, so that the North is able to contribute to the reductions required to the total UK carbon budget under the Climate Change Act? If a strategy doesn’t meet these two criteria then it almost certainly won’t pass the carbon test.

We’ve already noted in a separate article Does the new TfN strategy meet its legal requirement to protect the environment? that meeting this challenge is not optional, but in fact a statutory requirement, in that the act of Parliament establishing TfN as a subnational transport requires that its strategy ‘… must have regard to (b) the social and environmental impacts in connection with the implementation of the proposals contained in the strategy’?

And in their dialogue with TfN over the last three or so years in the buildup to the strategy’s publication, the environmental transport organisations have been insistent, at every possible occasion, on reminding TfN of the need for its future strategy to be built around its ability to pass the carbon test. In their report of December 2016 on behalf of TfN, Campaign for Better Transport reported on the results of their formal engagement with environment stakeholders: “In summary, the responses are dominated by three issues: First, there is a strong view from the participants that carbon reduction and high environmental standards should be essential goals for TfN’s strategies and its programmes. There is a view among some economists and business groups that reducing carbon, cutting air pollution and promoting high environmental standards impose costs on the economy and business, and hence these goals have to be traded off against economic goals. NGOs in general rejected this view. Instead they cited evidence that reducing carbon emissions and promoting high environmental standards brings economic as well as environmental benefits.”

The CBT report contains 272 references to ‘carbon’!, including to the carbon test itself: ”NGOs in this sector are acutely aware of the challenge of meeting essential and binding carbon reduction targets, and the critical role that transport planning plays. … TfN should see embracing carbon reduction as a goal of the STP instead of a constraint upon it: otherwise there will be an inevitable conflict between expanding travel and reducing carbon emissions. For many environmental groups, this is the primary challenge faced in developing the STP and other strategies, and the basis on which success or failure will be judged.” The need for this analysis not to exclude areas of activity where the increase of transport carbon emissions is actually being promoted was emphasised: “The carbon impacts of airport expansion plans in the North were also raised, and TfN urged to take account of these in setting ‘northern carbon budgets’.”

So how does the draft strategy actually fare, firstly in inserting carbon reduction at the heart of its strategy framework? Well, there are only 15 references to ‘carbon’ (as against 362 to ‘economic’/‘economy’), but the gravity of the issue is strongly acknowledged at headline level: ‘Reducing carbon emissions is now imperative.’ p.35 The TfN’s principles for pan-Northern transport investment include that ‘The North collectively, both public and private sector, needs to work towards a transport network that significantly reduces carbon emissions and harmful air pollutants, particularly CO2, NO2, particulates and noise.’ p.90 . Finally, the inclusion of transport in the Government’s Clean Growth Strategys (Oct 2017) is noted: “The [CGS] Strategy identifies transport, which accounts for 24% of UK emissions as a key area for action, setting out a series of policy measures focussed on accelerating the shift to low carbon transport.”

But what’s missing from these statements? Well this for example: “Carbon dioxide emissions [from UK domestic transport] increased 0.9% from 2015 to 2016, the third successive year that emissions have risen. This trend needs to be reversed, as a matter of urgency, to deliver a reduction in emissions of 44% from 2016 to 2030.” Committee on Climate Change 2017 Progress Report p.110-11pdf – our emphasis Note the scale of that reduction, and the looming deadline – just 12 years away. Furthermore any reference whatsoever to the Committee on Climate Change and its recommendations is omitted entirely from the strategy’s evidence base p.94-5 And let’s keep an eye on these shifting numbers, because the full extent of transport impact on UK carbon budgets was properly acknowledged, by DfT themselves, as not 24% but 36% when international aviation (and shipping) is included. DfT Future of UK Aviation July 2017 p.65

At the level of the strategy’s objectives, is a carbon reduction target established, or not? The answer is: No. The wording of its fourth objective Promote and support the built and natural environment appears, artfully, to suggest support for actual carbon reduction, when closer examination reveals that it does not. Read carefully through its 206 words: a statement like ‘Promote and support low carbon growth through the use of solutions that reduce carbon emissions and air quality impacts across the strategic road and rail networks’ is instead focused on a particular type of economic growth (‘low carbon growth’) and is consistent with simply reducing carbon emissions by just a little bit from a BAU scenario that has previously increased them, rather than setting a quantified and absolute transport carbon reduction target calibrated to a CCC trajectory. If that’s missing in the strategy’s objective then this deliberately introduced ambiguity will undermine any clarity that policymakers require in drawing up its programmes and detailed schemes, and any certainty that climate stakeholders need to rely on when holding the strategy to account, now or at any future date.

The second aspect of our test requires the draft strategy to demonstrate by modelling what will be its quantified carbon reduction output if its proposals (for ‘improved connectivity in support of transformational economic growth’) were actually to be realised. Does the strategy do this? No, it does not.  (The word ‘carbon’ does not appear once in the ‘Key Messages’ concise booklet, which will be how most people will engage with the strategy.) So for almost all consultees this test has not even been identified, let alone passed.

But, presumably because of the previous persistence of environmental stakeholders, TfN have commissioned some preliminary modelling on the carbon consequences of its strategy. It was made available to us on 13th February, but hasn’t been formally published by TfN, and we understand won’t be finalised until the autumn. It needs to be read in conjunction with the TfN Future Transport Demand report which modelled four scenarios – 1 Compact & Digital, 2 Compact & Travel Friendly, 3 Dispersed & Digital and 4 Dispersed & Travel Friendly; against a DfT reference scenario – ‘that reflect futures in which interventions (including the programme of transport improvements outlined in the Northern Transport Strategy) have achieved the transformation in the economy of the North but with differential patterns of travel demand.’ The unpublished carbon analysis models an emissions output for each of these scenarios.

For our carbon analysis the important thing to understand about the scenarios is that the ‘travel friendly’ ones (2 & 4) incorporate strategy preferences for ‘Technological development [which have] led to advances in ‘Travel Friendly’ connectivity options’ and ‘Energy costs and therefore travel costs are low’, in a situation where the eventual draft strategy is indeed actually proposing just that: a preference for increased physical connectivity.

What the initial TfN carbon analysis shows is that, compared to the DfT reference scenario (presumably for the Northern region, but effectively a national comparator) which results in -8% emissions by 2030 – TfN scenarios 1 and 3 (i.e both the digital ones) bring about a larger -14% reduction in carbon emissions, whereas 2 and 4 (‘travel friendly’) only produce -9%. So if we were having to choose between the ‘travel friendly’ scenarios, or alternatively the ‘digital’ ones, then it seems to be the case that it’s the former we should be avoiding; and yet their increased physical connectivity is precisely the thrust of the entire TfN strategy.

But even more importantly the carbon reductions of -9 or 14% by 2030 that the TfN strategy might achieve under any scenario are nowhere near the -44% by 2030 recommended by the Committee on Climate Change. When challenged about this at consultation events the TfN response has been to point to the later projections that show carbon reduction accelerating between 2030-50 as increasing deployment of EVs becomes inevitable; but as we know the critical timescale is between now and 2030. And of course all the above figures omit the additional contribution of aviation carbon, the expansion of which the TfN strategy is seeking to promote. A separate article on TfN support for airport expansion and its carbon consequences will be published shortly.

So – taking all the parts of this carbon analysis together – what it appears to show is that TfN have developed a strategy that is pointing in quite the wrong direction so far as carbon and climate change are concerned: towards more physical connectivity, and with it not less carbon, but MORE.

Using carbon reduction as a critical policy driver within the TfN strategy would instead point towards not investing excessively in long-distance connectivity (particularly by road) but rather in shorter distance connectivity within cities, in digital capability, and for longer distances in rail (which also strengthens urban centres). It’s this sort of alternative strategy that would then really need to be tuned up to see just how much further towards the -44% carbon reduction target set by the Committee on Climate Change the TfN strategy and all the constituent public authorities across its area have to reach. It’s not an option.

This article only tells half the TfN carbon story. It continues with ‘TfN’s transport strategy recklessly encourages aviation carbon growth‘

News: Could Manchester ever be as bike-friendly as Copenhagen… ?